Shishkin to go chasing at Kempton on Monday | Racing News

Shishkin to go chasing at Kempton on Monday | Racing News 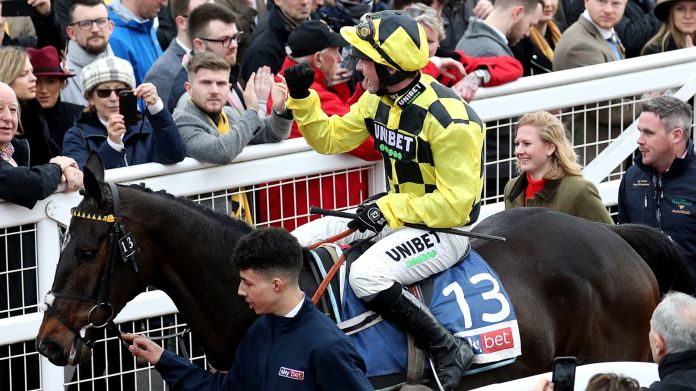 Shishkin is in line to make his eagerly-anticipated debut over fences at Kempton on Monday.The six-year-old has won four of his five starts since joining Nicky Henderson from the Irish point-to-point field, his only defeat coming when suffering an early fall on his first appearance over hurdles at Newbury 12 months ago.- Advertisement – Shishkin went on to win his next three races, including a thrilling victory over Abacadabras in the Supreme Novices’ Hurdle at the Cheltenham Festival in March, and is a best priced 3-1 favourite for next year’s Arkle Trophy.Speaking at the Ladbrokes Winter Carnival Gallops Morning at Newbury on Tuesday, Henderson said: “I’m thinking of running Shishkin at Kempton on Monday – it is the race we used for Altior.“He has a piece of work to do tomorrow morning, and then a school. The race is just falling at the right time, and Kempton is a good course to start them off at.- Advertisement – The latter already has a chase rating of 150 after finishing second on his first start over fences in Britain at Market Rasen last month. “He is a great, big horse and a great jumper, touch wood.“If he was a serious Champion Hurdle horse you would go there, but I think he is better off down the two-mile chase route.”Shishkin is one of seven entries for the two-mile-two-furlong Racing TV Beginners’ Chase, with the Paul Nicholls-trained Pic D’Orhy among his potential rivals.- Advertisement – – Advertisement –